Gai Halud was held at Salimullah Muslim Hall of Dhaka University (DU) on the 10th of last month. In less than a month, the martyred sergeant of the University of Dhaka – Wikipedia,The festival of yellow on the body . Zahurul Haque Hall, has once again held a yellow on an exceptional body. However, this time the parents and relatives were present, along with the bride and groom.

Yellow was held on Wednesday (March 2) night in the guest room of the hall. The wedding will be held next Friday (March 4) according to the family’s religious rites.

DU in the festival of yellow on the body

It is learned that Zahid Biswas, a classmate of the same department and session, is getting married to Atiya Sharmin Tama, a student of Bangamata Sheikh Fazilatunnesa Mujib Hall and a student of Islam History and Culture Department of the university in the 2014-15 academic year. The bride’s house is in Chapainawabganj district and the bride Zahid’s house is in Magura district.

Zahid’s friend Shakil Ahmed said that Tama and Zahid fell in love from the 2nd year. From then until today there is a beautiful relationship of trust between them. If the two had decided long ago, they would have a yellow ceremony.

If the two had decided long ago, they would have a yellow ceremony. 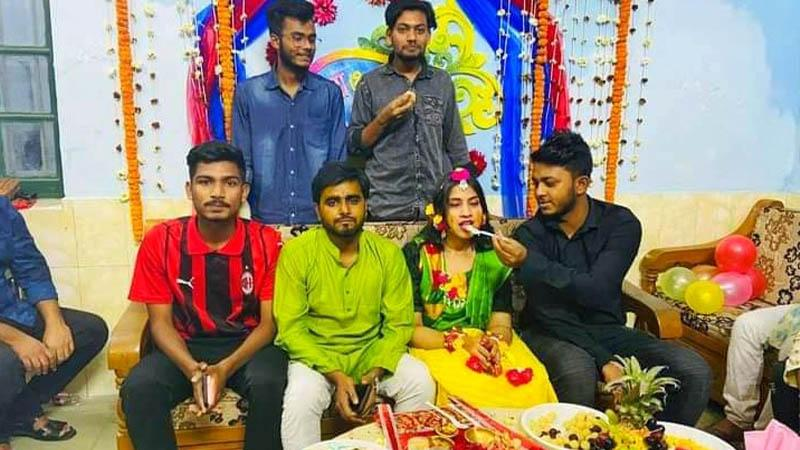 The bride’s father Azizul Haque and mother Shahana Begum were present on the occasion. “We never thought it would be so beautiful,” they said. To this day we have come to dominate the will of the girl. There was a belief that the girl would never go wrong. Expect prayers for the last daughter and son-in-law, Azizul-Shahana couple.

It may be mentioned that on 10 February, Salimullah Muslim Hall held a yellow on a different body of Habibur Rahman Robin, a student of Bangla Department of Dhaka University in the 2017-18 academic year.